The three handsets are members of the A-series (2017).

An interesting feature that is present in the three handsets is the IP68 dust and water resistant technology.

What this means is that the A-series handsets can remain in water for up to 30 minutes without sustaining any damages.

This is a great feature since water and smartphones have been big adversaries for long.

This will also bring to an end the peculiar suggestions on how to revive a phone that has come into contact with water: the weirdest of them all is one to do with a hair blow drier. 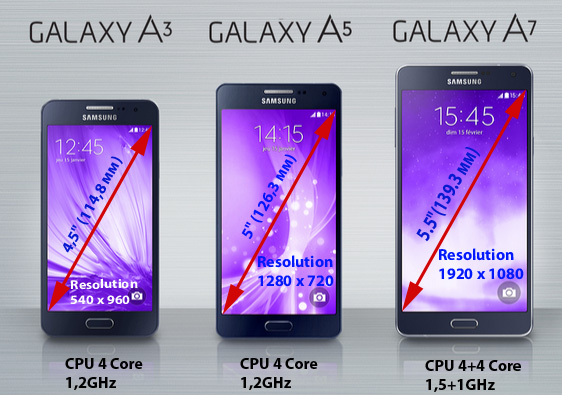 Among the three midrange smartphones, Galaxy A7 seems to have the best features.

Nonetheless, both A5 and A7 share several features in common.

The most significant have to be the processing power, OS, camera features, and RAM.

A Comparison of the Three A-series Smartphones:

The three midrange handsets are expected to be released into the market by the end of January 2017.

The features are impressive and may give the handsets a competitive advantage over other devices in the market.

Nevertheless, the price is expected to be a bit on the high end; hence, it will be interesting to see the kind of reception they receive.

Samsung says that the smartphones come with a fast charging feature and while this is welcome, we will have to wait and bear witness.

In the meantime, we just have to sit back and wait for Samsung to make final preparations before their release into various markets.

The three handsets come with impressive features and it will be interesting to interact with each for a full review.

[…] this year, Samsung launched Galaxy A3, A5, and A7, three midrange handsets whose specs we A-Okay. But we all knew that Samsung […]