The Kenyan Immigration Department has finally revealed the New E-Passport.

It has been a long wait characterized by deferments but we finally got a glimpse of the new your e-passports.

We have been stuck to the analog passports for far too long; hence, it is time to phase them out. We cannot deny that taking the application process online was a welcome step but even the actual passports also needed a makeover.

Talks about the new passport started way back. They were to be issued in December last year (2016) but this was deferred to April this year. The roll out date was further pushed to 1st September. We can only hope that there will be no more deferments. It has been such a long wait.

This tweet by the immigration department gives us the actual picture of how the new E-Passport will look like.

The Kenyan e-Passport is here;

Below is the picture they shared: 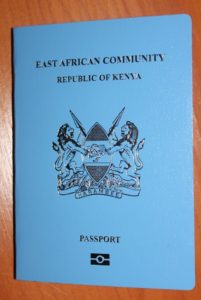 From this picture, we can clearly tell the new E-Passport apart from the old one. The first distinguishing factor has to be the new logo located at the bottom. The logo is a symbol of a biometric passport.

The next feature has to be the new color theme. The ocean blue color scheme has replaced the dark blue color theme of the old passport.

In a Tweet, the Immigration Department via their verified account justified the choice of color. They said that the color signified Lake Victoria which further signifies the unity of the “EAC Partner States”. They added that the color was agreed upon by EAC member states.

The final distinct feature is the label “East African Community” at the uppermost section of the new e-passport. This replaces the “Republic of Kenya” label encrypted in the old passport.

The new passport comes with an electronic chip which will store information. It will also have a biometric identifier, digital photograph, and security features that will help prevent forgery cases.

This means that you are getting a travel document with enhanced security features, meets global travel standards and one that is easily obtainable thanks to the online application process.

In the meantime, we are still in the dark about how much it will cost to acquire it. In addressing this, the department tweeted:

“-How much it will cost; -That is yet to be determined, we will communicate with time”

Also, we can only hope that there will be no more postponements. If their tweet is anything to go by, then we can rest assured that September is a done deal. The immigration tweeted:

“-On when we will start issuing them: -as from September this year.”