Dagitari Wanjohi Kigogoine is a mystery, at least as far as Facebook is concerned, however, many of you have heard of the cheeky fella who calls virtually every Kikuyu Vernacular station in town.

The Nyeri fella always leaves fans laughing by how he engages the audience and listeners and sometimes go ahead to request and sing vernacular songs on Air.

However, there is the other Wanjohi, The Dagitari Wanjohi Kigogoine aka Leader.

Though to many he remains a mystery fella who “beats ” stories of Giant on Facebook, he is known to pen witty and hilarious articles on his Facebook page (https://www.facebook.com/wanjohi.wamagogo).

His articles continue to crack ribs.

Dagitari Wanjohi Kigogoinei, as many of his followers love to call him, his witty and stories of giant keep followers coming back for more.

His friends also remain a mystery “Theuri ” Akuku ” and “Mpesa”. He is one of the most followed characters on Facebook.

He has over  has over 60,000 Facebook followers. The real wanjohi of “Nyeli” will remain calling radio stations while Wanjohi Kigogoine crack your ribs on Facebook.

However here is the face behind the Kikuyu radio fanatic. 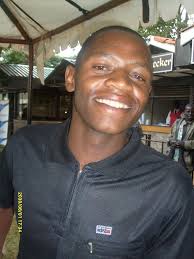 Well, confusing but who cares!!