In the beginning, there was Nokia 3310. This was way before the advent of iPhones and Samsung Galaxies.

That was almost 17 years ago to be precise.

By now, most of us must have heard about Nokia 3310 comeback.

Rumors had been doing rounds about the possible comeback and Nokia put them to rest by officially announcing the handset’s return.

This was witnessed during the 2017 Mobile World Congress.This spread excitement in many corners of the world since Nokia 3310 had been bae to millions of people.

If you were a fan of Nokia 3310 back in the day, chances are that you are already nostalgic after the announcement of its comeback. And we all know that nostalgia can be a seductress.

If you did not own a Nokia 3310 back in the day, chances are that you knew someone who did. And you were jealous of them.

There is significant hype around it; hence, it is only fair to find out why.

1. The OG gets an update. If you have been envisioning the old Nokia 3310, in terms of general outlook and features, then your vision was a bit erred.

There may be some little similarities but the modern version of the handset has a modern update. Just do not expect a touchscreen.

Nevertheless, a fast glimpse tells you who the handset is paying homage to. It’s evident.

Maybe we can tell how fast this OS is once we test it. But I guess it should launch various features at a satisfactory speed. Hopefully.

This is one of the things that will take us way back. It may take getting used to but those who harbor fond memories of the original Nokia 3310 won’t have a problem.

4. The handset comes with 16MB internal memory that is expandable by up to 32GB. I honestly don’t have a comment on that. I choose to take a moment of silence.

I am pretty sure this will be greeted with a collective yawn given that we are now talking about a 20MP rear camera.

However, if you are looking for a perfect backup or travel handset, the new Nokia 3310 will serve the purpose.

6. The handset is powered by 1200mAh removable battery.

One of the reasons the old Nokia 3310 achieved a status was because of its impressive long battery life.

The Nokia website promises battery standby for up to a month but we can’t confirm that yet.

Maybe there is a little exaggeration, two weeks would be believable.

This is definitely a significant loss of calories from the OG which was a bit flabby and had a bit of a derriere. 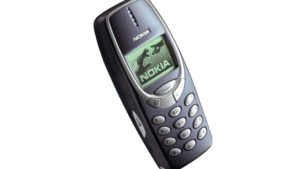 8. The handset is a dual SIM. That’s welcome even though most will use it as a backup handset. Still, we will take it.

9. And yes, you can play your favorite Snake game.

You don’t have to entertain boredom when waiting for your bus, in traffic, during lunch breaks, or when you just need a break.

Those who owned the old Nokia 3310 agree that Snake was very addictive, it’s like the modern day Candy Crush.

10. The handset is Internet-enabled and comes with a color screen.

This is a significant difference from the old model which retailed at a much higher price.

But that’s expected given such a combination of specs in 2017.

Will you be purchasing a unit? Let us know in the comment section.