The ratings are based on the market share and positive feedback.

A present, there are over 15 licensed local TV stations while several other are awaiting final nod. Of the 15, only a few have managed to stand out.

The results showed that Citizen TV took the top slot in ratings measured during peak hours. The report also showed that its highest ratings were during primetime with an average score of 10.83.

KTN takes the second slot with its highest ratings recorded between 7.00-7.30PM.

This has been summarized below:

The Geopoll also considered average audience share across the day.

The Table below summarizes audience share across the day:

This involved an analysis of ratings and share for the selected stations.

Radio Maisha took the second slot with an average rating of 5.16. The highest ratings were recorded at between 6.00-8.00AM.

This has been summarized below: 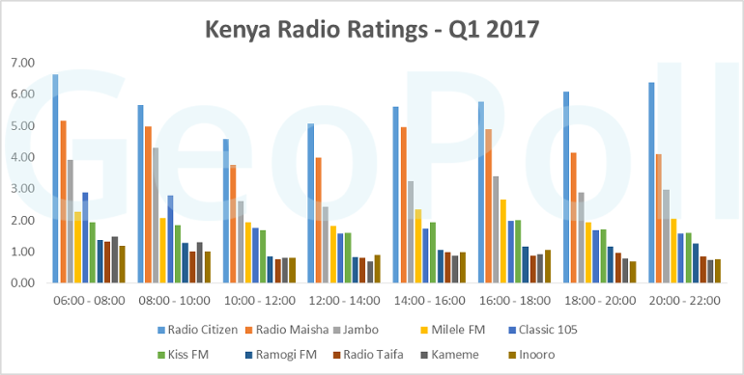 Below is a summary of the radio audience share:

The 34% “others” share is for those stations which broadcast at a regional level across various parts of the country.

For both TV and Radio, Citizen appears to be the top rated station in Kenya. The station has a strong focus on local programming and this may explain the high audience share.

NTV comes second in television viewership. Nation Media has been forced to close down QTV, QFM, and Rwanda’s KFM with the objective of transforming the Nation Media into a competitive digital content company. QTV was merged with NTV.

As the local media continues to grow and diversify, the focus should be on transforming it into a 21-st century content platform.