Last week, social media was flooded by online jokes and memes of Vifaranga Vya Computer (kompuyuta) as remarked by Raila Odinga minutes after the National Super Alliance (NASA) announced that it was heading to supreme court to file a petition challenging presidential results in which President Uhuru Kenyatta was awarded victory.

Well, this was a hilarious declaration by Raila Odinga that President Uhuru Kenyatta and his Deputy William Ruto are alleged  “vifaranga vya kompuyuta, waliochaguliwa na kompyuta, (computer generated leaders)” as per the statement by Nasa coalition headlined: ‘Kenyans say no to a Computer Generated President.’

Just a few hours after the election results started trickling in, Raila at a NASA press conference made allegations that the results were, “neither verified nor backed by Forms 34As and 34 Bs.

It is a bizarre phenomenon that Uhuru stayed in the lead by a consistent 11%. It never went up or down. An algorithm was introduced into the IEBC databases which basically mounted a formula to create a fixed gap between Uhuru and I.”

So far Raila Odinga through Nasa Coalition lawyers has filed a 25,000-page presidential petition, accusing the electoral agency of manipulating votes in favor of Uhuru and denying him the win.

The petition was received on 18th August 2017 at the highest court in the land at around 11.30pm by Registrar Esther Nyaiyaki.

President  Uhuru, Chebukati, and IEBC  have too been served with the election petition by NASA as who are positively waiting for a verdict by a team of judges led by Chief justice David Maraga in 14 days. 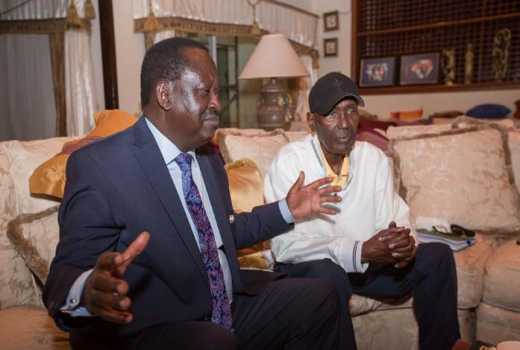