The LG NeoChef Microwave hit the Kenyan market earlier this year and they have been getting quite the attention owing to their advanced technology.

The new microwaves are nothing like what we are used to and LG is not shy to say that these appliances will “replace the chef in your house”.

The old microwave models will have to pave way since LG’s latest appliance stand out owing to the technology that has been used to manufacture it.

This is definitely an answered prayer for those who avoid the kitchen like a plague. LG promises that the LG NeoChef will ensure that you prepare your meals in a “simple, fast, and efficient way”.

Cooking is an art and heat plays a big role in determining how food will taste. This means that the heating element is an important part of the cooking process.

When it comes to heat transfer in cooking, the how much and when matters a lot: This may explain why chefs recommend a controllable heat source.

Well, it seems that LG had an epiphany; hence, the new lineup of microwaves that are set to change the game.

The appliance signals the future of cooking: simple and efficient. Let’s cut to the chase and delve into what LG’s NeoChef brings to the table.

The LG NeoChef microwave presents you with a variety of cooking options. However, the main selling point of this appliance has to be the Smart Inverter technology.

Speaking during an event to officially launch the appliance, the LG Managing Director for East and Central Africa, Janghoon Chung revealed that the LG NeoChef Microwave can handle all types of cooking including baking, frying, grilling, defrosting, and much more.

The electronics giant has promised that this technology will save time and conserve energy.

The NeoChef Microwave comes with “anti-bacterial “coating which makes cleaning easy. This also includes an Ant-Bacterial EasyClean interior which “eliminates 99.99% of harmful bacteria”.

The healthy fry feature will reduce the amount of residual fat in your potato wedges such that you do not have to use the fryer but the microwave instead.

The stable turntable comes with six hexagonal rings and will offer stability such that off-center items will not tip or spill during cooking.

See the picture below: 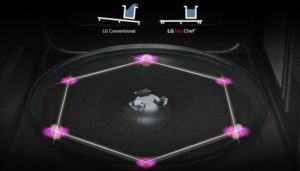 LG NeoChef lineup consists of three models: the standard solo microwave, the larger one that comes with a grill and the Convectional premium microwave.

You can buy the new microwaves in all LG retail shops and supermarkets across the country. You can also buy a unit from the LG’s Online Shop.