Many people wonder about the lady who they have been hearing and reading about every time they talk of Miguna.

Miguna Miguna is a Kenyan author and columnist. He was born in 1963 in Kenya’s Magina village. Miguna was named after his father and he is the last born.

That is the reason behind his name being the same twice; Miguna wuod Miguna.

He is an advocate in Kenya’s High Court and also a solicitor and barrister in Canada. He has served to Raila Odinga, former Prime Minister; as a senior advisor from 2009-11.

Miguna used to be a student leader when he was young. He was then studying at the University of Nairobi. His political activism got him detained during Daniel Arap Moi’s regime.

Soon after he was released, he went to Tanzania and stayed in Swaziland for a short time. In Canada, he was given political asylum where he pursued higher education.

He acquired his bachelor’s degree 1990; in Philosophy and Political Science from the University of Toronto. He later studied Law at Osgoode Hall Law School.

Miguna Miguna age is 55 now and he is a lawyer as well as one of Kenya’s most talked about figure.

Atieno Miguna, daughter of Miguna Miguna was rumoured to be involved in a sex scandal after she was discovered on a number of sex websites.

According to Kenya’s popular newspaper The sde.co.ke, Atieno works as an escort in Canada and has been found posting obscene pictures on adult websites.

They added that she has been using a fake alias named ‘Tiana’ and seeking for non-black men. She had been on these websites since 2016.

Miguana Miguna daughter photos are all over the internet and when he was approached by the media in this regard, Miguna declined to make any comments and warned them not to write anything about his daughter.

He told them they were touching a live wire and asked them to keep away from his children.

We do not know what can be found in Miguna Miguna CV, but there are some things which we should know about him.

He later was appointed as senior advisor for PM Raila Odinga’s coalition affairs while he also served as Joint Secretary on the management of the Grand Coalition.

But in 2011, Miguna was suspended without payment because he was accused of gross misconduct.

As Miguna was always an activist, his habits did not leave him. He published his first memoir “Peeling Back the Mask:

A Quest for Justice in Kenya” on 14th July 2012 but faced hardcore protests from Raila Odinga’s supporters.

It happened because the book portrayed Odinga as a mountebank. While he was promoting the book in a hotel in Mombasa, Miguna was attacked but the police managed to rescue him.

Miguna stood down from ODM and declared that he was going to be a candidate for 2013 gubernatorial election’s Governor of Nairobi County but cancelled it later.

In February 2013, he published another book called Kidneys for the King: Deforming the Status Quo in Kenya.

Unsurprisingly, it listed out a number of bad things done by Odinga. Raila, however, did not answer to any of the claims made in the book.

Before releasing another manifesto in August 2016, which became revolutionary; Miguna announced to be competing as an independent candidate for the post of Nairobi’s Governor.

His book spoke about strong leadership with clear policies and transparency, availability of jobs, integrity, infrastructure development, and a commitment to the delivery of promised services. However, people did not put all their faith in him and he acquired 4th position in the gubernatorial election of Nairobi in August 2017.

Miguna, in 2010 was accused of dual citizenship which was not permitted by the law then. He was said to be holding passports for both Kenya and Canada.

To that, he claimed to be a pure citizen of his country Kenya and said that he had never left its citizenship.

Upon his arrest, his wife Jane got really worried and told the media how she thought her husband might have been killed.

She said that the commissioner was unable to provide her with any information from the Government of Kenya.

She was sad and troubled because nobody could give her any information. It became really hard for her to avoid telling the children about their father’s arrest and was scared that they might find out about it from the social media.

However, there has been not much information about her till now. All that is known about her is her name- Jane Miguna.

She has been married to Miguna Miguna for 18 years now and has been supporting her husband even when she is always worried about him.

Jane is not Miguna’s only wife. His first lady was Tracey Wynter Miguna. She is a Caribbean born living in Canada. Miguna got into a relationship with Tracey in 1995.

Wynter and Miguna lived in a single bedroom apartment in Toronto’s Chatham Avenue as he could not afford a bigger place. Wynter gave birth to Atieno Juma at Wesley Hospital in 14th July of the same year.

Miguna’s relationship with Wynter started only after a few months after Miguna had been admitted to the bar.

Atieno’s birth took time and he had to wait for over 9 hours before the doctor thought it was okay to start the epidural process. Miguna wanted to name his daughter Akinyi; but since his wife was not able to pronounce it properly, they decided to name her Atieno.

A few months after Miguna bought his first house, his wife gave birth to another child on December 4, 1996.

But Miguna and Wynter did not last long and they broke up after 2 years of relationship in 1998. In April of the same year, he went to Kenya.

There, he met Anthony Ochieng, his childhood friend; and he introduced Miguna to Jane.

A few months later, he returned to Kenya in search of her. He then got acquainted with Jane’s family and his relationship with her resulted in a traditional wedding on 6th August 2000.

It was 2 months later on October 29th when Jane moved in with Miguna as a permanent resident. Jane gave birth to the fraternal twins on September 1, 2001, and a daughter on 11th April 2003.

A lot of people search the internet for photos of Miguna’s wife but fail to find any. It seems like Miguna keeps his family and life a little secretive. Even then we managed to dig out Miguna Miguna family pictures. 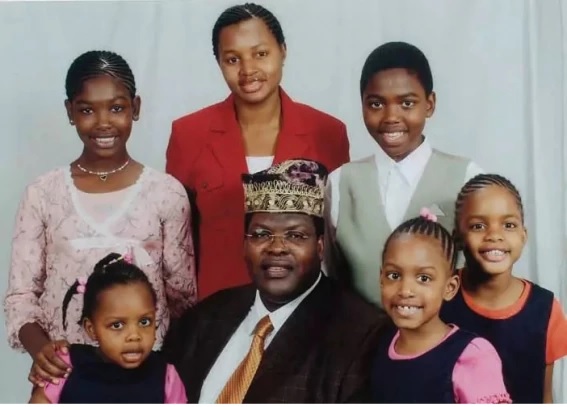 Above is a photo of Miguna Miguna with his wife Jane.

How long does a Passport take to be ready in Kenya

Single Ladies in Kenya and their Phone Numbers 2022