The Saitama meme can officially be pinned to the meme wall of fame. If you live in the online environment, you must have seen the Saitama meme.

This is the latest update to the 2017 meme calender.

In Kenya, social media networks act as, among others things, high courts and also a platform through which memes can be generated from random pictures and photos.

From time to time, an ordinary picture could turn into a viral meme.

This year started on a viral note as January gave us the Salt Bae. This pic made rounds until Roll Safe happened in late January.

The Roll Safe captioned memes mocking poor decisions making and the absence of critical thinking. And now, we have a new one: the Saitama meme.

This is borrowed from the comic series One Punch Man and it features Saitama, one of the cartoon characters.

In the meme, Saitama has his hand on his chest and his head angled on the side. He creates the impression of someone trying to defend himself.

That said, various social media users and big brands got the memo and hopped on the new trend. Don’t they always?

Below are some sample memes:

The one that really caught my eyes features Presidents Robert Mugabe. See the meme below: 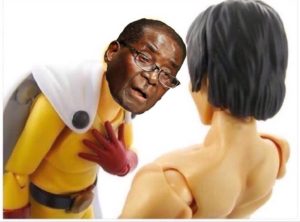 No we all know that Uncle Rob is determined to rule for eternity; hence, this meme was an accurate representation of his mantra.

Meanwhile, KCB Group had “learned” that a section of its customers lived under the assumption that loans had turned into grants. KCB always bring it and it definitely did not disappoint with this one.

The one featuring a tout was definitely funny and quite relatable. Touts have two faces: The polite one before you board and a conceited one, after the vehicle is full capacity and moving.

When Safaricom got wind of the meme, it decided to make light of a major complaint they get: I must admit that this one was a winner.

And have you seen the one by Tecno? It was hilarious especially since people made fun of the heating problem of some of their models. Nice try Tecno!

Urban Brands also hopped on the train and addressed a common customer complaint. The company has been accused of packaging three pieces of crisps and filling the remaining space with air. True story.

And then there is this:

Mimi? Nikasema Kidero you have slapped me, Mimi?

The Kenya Cancer Association received backlash for their Saitama meme. The meme attempted to dispel the belief that Cancer is a death sentence and this did not auger well with a section of social media users.

Some felt that not all memes can work for all brands. Other felt that cancer is a sensitive subject; hence, no one should be making light of this illness.

The Saitama meme is still making rounds on various platforms. As is tradition, something new will crop up but in the meantime, let us enjoy Saitama.

It is always good to see social media take a break from hate and confusion. We will be happy to see more of these memes in coming months especially since political temperatures are high as we near the August General elections.