Samsung Galaxy A7 (2017) is among the three A-series handsets recently unveiled by Samsung electronics.

Samsung electronics has a lot to prove after a series of Note 7 fires that happened in 2016.

Well, it seems that the giant electronics company got that memo and its first order of business in 2017 was to launch three midrange devices.

This could be the company’s starter before it releases its entrée in coming months.

The handsets enter a competitive market given the wide range of mid-range devices.

The giant manufacturer, however, promises that the handsets are of premium class and that they have been designed with users’ needs in mind. 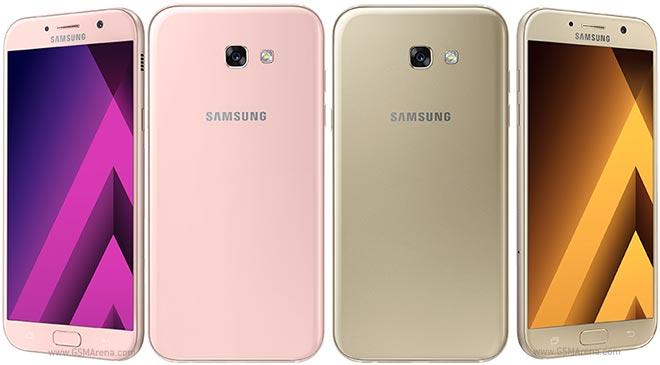 Galaxy A7 is perhaps the best of the three in terms of specs.

Yet, the three handsets share some common features, particularly the IP68 dust and water resistance technology.

Also, the three handsets spot metal frames and 3D glass rears. A7 is expected to be the higher-priced model but it shares some features with A5.

It is a good phone especially because it carries features that are not available in most mid-range devices.

Below are Galaxy A7 Key Specs:

Galaxy A5 and Galaxy A7 sport a lot of similar features. Major differences are in the screen size, battery capacity, dimensions, and price.

If you are a selfie lover, Samsung has introduced a feature that can enable you to take shots with ease.

The camera UI has been tweaked so that a free floating shutter button can be dragged around the screen.

Just like all other A-series handsets, Galaxy A7 does not come in Android Nougat.

The handset comes with Android 6.01 Marshmallow but the good news is that we can always update to latest version later on.

This is not a deal breaker since it sports other fascinating features.

Another feature that will make you happy is the dual-sim unit and a MicroSD.

This is definitely a plus since the hustle of having to remove one SIM card to place another is unexciting.

Galaxy A7 is a premium handset that comes with great camera features, design, display, and a good battery capacity.

It is definitely an upgrade from previous models.

The only problem is the price.

It is a bit on the higher side; hence, it would be interesting to see how it will compete with other higher-end midrange handsets.