Reports of a re-entry of refurbished Galaxy Note 7 units have been doing rounds for quite some time now.

The reports indicate that Samsung may be replacing the faulty Note 7 batteries with tested lower capacity models.

Then the smartphone manufacturer will re-launch the refurbished Note 7 versions in select emerging markets; particularly India and Vietnam.

Well, while Samsung had earlier refuted these claims, recent reports suggest that refurbished Note 7 smartphones may hit the market in June in South Korea.

So yes, there is a possibility of a refurbished Galaxy Note 7 for select markets, probably as soon as June.

Samsung India made a public statement to Gadgets 360, and the statement termed such reports as “incorrect”. Samsung HQ is South Korea is yet to release an official statement regarding the matter.

The blogosphere is something else.  Somehow there is a general perception that rumors sell more. And they do.

A Korean website had published the widely circulated report stating that refurbished Note 7 smartphones would be available in select markets this June.

Initially, Samsung had snubbed such reports and proceeded to increase production of Note 7s using batteries from Amperex Technology, a Hong King firm, but these also turned out to be faulty.

Below is a photo of an exploded Galaxy Note 7 smartphone: 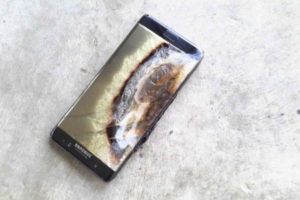 An image of an exploded Note 7 handset

This is not the first time reports of a possible sale of refurbished Note 7 have surfaced.

In November 2016, another Korean publication, The Investor, has alleged that Samsung was planning to sell refurbished versions of Note 7.

The reports suggest that re-launching Note 7 would be Samsung’s way of reducing financial losses incurred after the Note 7 crisis and dodging a potential environmental fine.

It is reported that the giant tech incurred losses of at least $5 billion.

Even authoritative sources such as cnet.com have published a report alleging that the company could be re-introducing Note 7 into the market.

The tech reporter cited unnamed Samsung staff as the sources of such assertions. But at least it was ethical enough to term the information as allegations.

Some people have argued that Samsung is not likely to launch a smartphone by the Note 7 name for two main reasons: first the name Note 7 is already tainted, and two, it would divert attention from the soon-to-be-launched S8 and Note 8.

The giant tech weathered through the Note 7 recalls and we have seen it introduce mid-tier smartphones in January 2017: the giant electronics company has introduced Galaxy A3, A5, and A7 into various markets this year.

The company has vowed to undertake thorough tests on its future products to avoid a repeat of the Note 7 crisis.

Moving forward, Samsung has promised to focus on enhancing product safety for its consumers by improving quality assurance processes.

Don’t believe everything you read though.  You may not be seeing Galaxy Note 7 for sale in 2017. It may not be coming back from the dead.

But we cannot overrule a comeback.

Irrespective, I wonder what the reception would be.

Of course, it is not clear about what kind of a reception the smartphone would receive.

Some reports have indicated that the handset is still popular in some regions despite the fires but these are unconfirmed reports.

Be the first to weigh in by participating in the poll below.