Celebrated Kenyan filmmaker Wanuri Kahiu has landed yet another Hollywood deal that will see her collaborate with How to Get Away with Murder actress Viola Davis and fantasy sci-fi writer Nnedi Okarafor (Binti).

According to Deadline, Davis’ production company, JuVee Productions, is developing Wild Seed, a drama series adaptation of Octavia Butler’s novel for Amazon streaming platform – a project that will be co-written by Okarafor and Wanuri, the latter also directing the series.

Wild Seed is described as a “love and hate story revolving around two African immortals who travel the ages from pre-Colonial West Africa to the far, far future.” – Deadline

This news comes barely a fortnight after it was announced that Wanuri is set to direct a film adaptation of the Young Adult novel The Thing About Jellyfish at Universal, starring Netflix’ Stranger Things’ Millie Bobby Brown.

Back in November 2018, and in the height of Rafiki’s global success and controversy back home, Wanuri landed her first Hollywood gig to direct Covers, a romance title set in LA for Universal and Working Title.

First feature film – From a Whisper 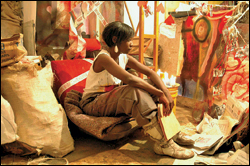 Corine Onyango in From a Whisper/Variety

Wanuri’s first feature film From a Whisper, released in 2008 and based on the 7thAugust terrorist bombing in Nairobi was an instant hit. It bagged 5 awards out of 12 nominations at the African Movie Academy Awards 2009 and paved the way for more ambitious projects. Like Pumzi, an afrofuturistic sci-fi short film which depicts a post-apocalyptic Africa whose only hope lie in the hands of a young botanist who dares to dream beyond her suppressive machine-powered enclosed universe.

A strong believer of telling the African story in a “fun, fierce and fantastical way”, Wanuri coined the concept Afrobubblegum to change Africa’s common depressed narrative, and instead to represent Africa in a positive light by finding more joy in the continent’s diverse creativity.

She says of Afrobubblegum, “Most people like to think of Africa only as a sum of its problems…this has created a single story with only one perspective of Africa. If the only stories about us are desperate, hopeless and lost then how can we imagine anything better than that? As a result, we created Afrobubblegum…if we can see ourselves as heroes, then maybe we can imagine radical hope for a better future.” 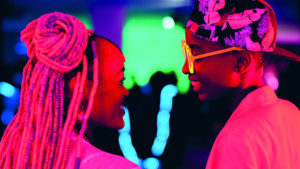 It’s this kind of non-conformist, ambitious and experimental mindset that has drove Wanuri’s career as a filmmaker in Kenya and beyond. In the process, she’s created films that challenge the status quo and ruffle a few feathers like Rafiki.

Released in 2018, Rafiki follows two young women who fall in love despite the societal pressures and homophobia around them. The first of its kind in Kenya, Rafiki was banned by the Kenya Film and Commission Board for its gay theme that was labelled as “too hopeful.”

But like the daring filmmaker behind it, Rafiki refused to be restrained – instead becoming the first Kenyan feature to be screened at the Cannes Film Festival and garnering a string of accolades including a Silver Q-Hugo award for Wanuri at the Chicago International Film Festival and a Best Actress award for lead Samantha Mugatsia at the 2019 FESPACO film festival 2019. Rafiki’s most recent achievement is winning the #FreeToBeMe award at the Amsterdam LGBTQ Film Festival on 22 March.