History was made this week (at least in Kenya) as the long-awaited and heavily criticized SGR began operations.

All in all, it was a great week and as usual, it is time to look at the top weekly tech trends that dominated the tech world airwaves.

We have been singing the SGR song for quite some time now.

It gets better because it will now cost you less in terms of hours and money: The fares start from as little as Ksh. 700 and the trip from Nairobi to Mombasa will take less than five hours.

Many people praised the project. Even Joshua! And if he did, who are we to say anything negative?

Safaricom became the first telecommunications company in Kenya to launch the 4G network and it now seems that the telco is going a step further.

The company has, this week, announced the roll out of 4G+ network in major towns in Kenya.

Kudos to Safaricom for always setting the bar high.

3. Leaksters do what they do best with Samsung Galaxy J3 2017

Leaksters and tipsters have made it their business to lift the veil, albeit a little, before smartphone manufacturers do so and we cannot be mad at that. In fact, they are our allies.

Thanks to their ‘work’ we can now report that Samsung Galaxy J3 2017 model is an okay handset.

4. Moto G5 and Moto G5 Plus to be in Safaricom shops starting next week

Moto devices, formerly Motorola, were supposed to hit the market some time back but they didn’t.

The better news is that Lenovo East Africa has partnered with Safaricom in a bid to have all their devices available in Safaricom shops.

Go on and get yours and your nearest Safaricom shop. As of next week, that is.

It has been a hard couple of weeks for SEACOM but it seems that the storm is finally over.

The completion of the repair work for the Subsea Cable System means the resumption of normal operations.

It has been such as inconvenience for customers but we are finally happy that operations have swung back.

It appears that Skype is a bonafide member of this league too.

The instant messaging platform was recently redesigned and there are some things that remind us of Snapchat.

The revamped Skype comes with customization capabilities allowing you to customize using your preferred colors.

The new “Highlights” feature allows you to create a highlight your day’s events and moments through photos and videos.

Also, there is a new “Find” panel that allows you to search for things on Skype. This does ring some bells, Facebook Messenger anyone?

The word on the street is that Snapchat is a millennial favorite so that explains the excessive copycatting that has been evidenced.

In the end, may the best copycat win!

Ecobank has this week revealed a list of 20 finalists who will take part in its fintech contest in Togo. Five of these companies are Kenyan.

These are MobiTill, TEAM SAFEPAY, Greenshoe, Shield Finance, and Circle Group Savings.
All the best to the finalists.

Nokia 3310 is a throwback for most of us and we have been waiting for the day it will set foot (or is it screen?) in Kenya.

Well, it seems that we will have to wait a little longer for that.

HDM Global has confirmed that the handset will go on sale in South Africa and Nigeria from Mid-June.

Regardless, there is something about the refreshed Nokia version that makes it appear worth the wait.

So will do just that. Wait.

It seems that the Android architect Andy Rubin is tired of having to use handsets made by other companies.

He has manufactured the Essential Phone which comes with a 5.71-inch touchscreen display with a resolution of 1312×2560 pixels, 1.9 Octa-core Qualcomm 835 processor, 4GB RAM, 128GB ROM, 13MP primary camera, 8MP front-facing camera, and a 3,040mAh non-removable battery.

It came to pass that on the 31st on May 2017at exactly 12.06 AM, POTUS posted a ‘cryptic’ tweet that delighted some and left others confused. Here is a screenshot of the tweet: 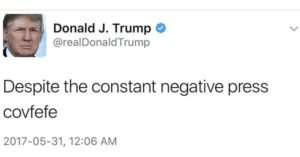 What followed is a frenzy that even led to the creation of words such as “incovfefeable” while others went ahead to define the word.

One @jackTweets attempted to define the word by tweeting”
“#Covfefe-A global internet meme that brings 7 billion people into complete agreement”
With this photo below it: 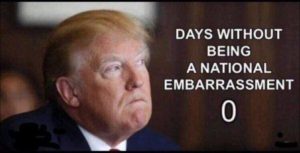 Have a lovely weekend as you try to figure out what the ‘Covfefe’ is wrong with the world.