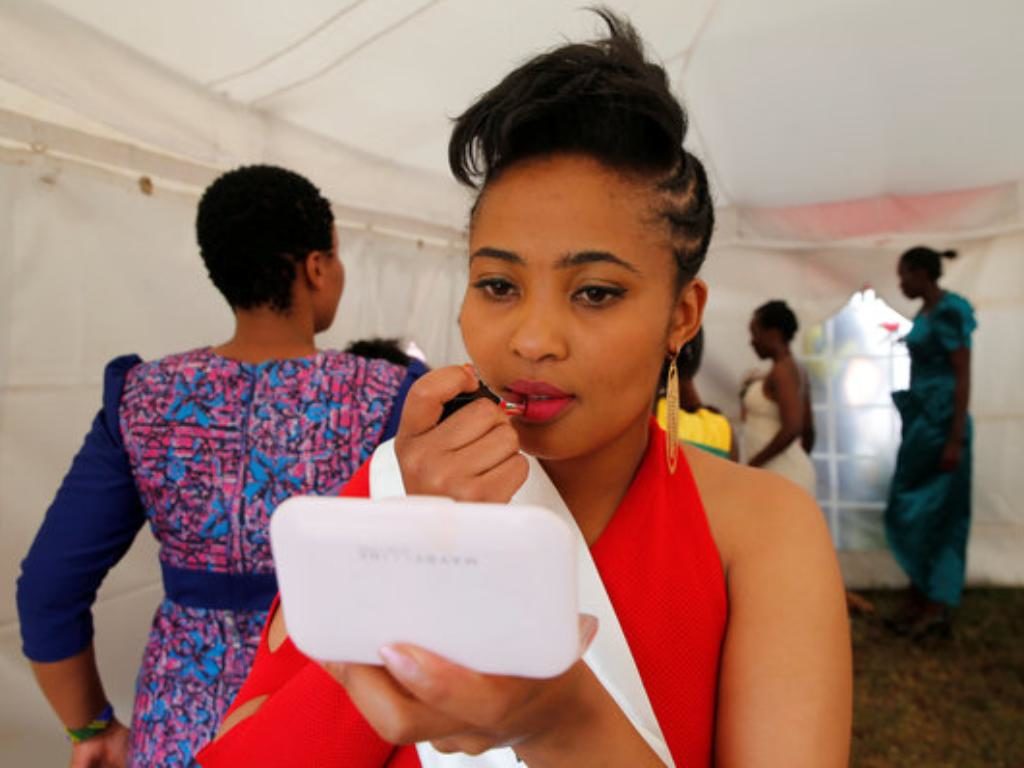 Ruth Kamande Wanjiru who was sentenced to death for killing his boyfriend by stubbing him 22 times.

According to submissions made in court, Kamande’s crime of passion was sparked by a revelation that her boyfriend had allegedly been taking HIV suppressing drugs without her knowledge.

She made headlines after she was crowned Miss Lang’ata Women Prison’s beauty contest in 2016.

Ruth Kamande made headlines back in 2015 for two things in particular. One, it was alleged that she had stabbed her 22-year-old boyfriend 22 times with a knife and two, Ruth is stunningly beautiful. Ruth was arrested and locked up in Lang’ata Women Prisons where she won the Miss Lang’ata crown in 2016. She was termed the sexiest prisoner.

Speaking to eve Woman, Ruth revealed that she stubbed her husband: “Farid told me that he would rather kill me and himself than have his status exposed because I realized he was HIV positive, I stabbed him severally using a kitchen knife, which fell on my chest from his hands after I overpowered him after putting my two thumbs in his eyes to save my life,” she told the court, Ruth Confessed.

Ruth Kamande, a trained beautician, stabbed her boyfriend Farid Mohammed 22 times at his Buru Buru house in 2015 after she discovered love messages in his phone from his former high school lovers.

In her ruling on the afternoon of Thursday, July 19, Lady Justice Jessie Lessit noted the number of stabs proved the beautician’s action was intentional and malicious.

“Ruth Kamande did not stab the deceased in quick succession but one stab at a time as she was having pleasure in stabbing him,” observed Lessit.

Kamanda’s Lawyer, Joyner Okonjo,  had pleaded with the court on Wednesday, July 11, during the mention to mete out a lenient sentence on grounds the beauty was the only child to a single mum.

When arrested, Ruth, who was 21-years old then, had just enrolled for a business course at JKUAT. Her dream was shattered by the circumstances here in,” said Okonjo.

The court also heard the beauty queen has since converted to Islamic religion and prays five times a day besides being crowned Miss Lang’ata Women’s Prison in, an indication she was now reformed.

“Kamande has since converted to Islam. She is now religious and prays five times a day. She has also enrolled for a theology course in prison; an indication that her stay in custody has streamlined her,” he pleaded.

Her plea was however rejected by the prosecution judge asked the bench to hand her the death sentence so that it can be a deterrence. “The 24-year-old then, whose life was cut short is an orphan and had a task of provide for the rest of the family members, hence justice should prevail,” said the prosecution counsel.

This means according to the laws of Kenya, Miss Lang’ata Women’s Prison Ruth Wanjiru Kamande will spend the rest of her life behind bars after she was handed the death sentence by Milimani Law Court for murdering her boyfriend.

The beautiful woman who turned violent and stabbed her boyfriend 22 times was handcuffed on her hospital bed at Kenyatta National Hospital as police continue with man-slaughter investigations in 2015.

By then, the 21 year-old woman, Ruth Kamande Wanjiru, stabbed her 24 year old boyfriend, Farid Mohammed, to death in Buruburu on Sunday after allegedly finding a love message on his phone.

Buruburu OCPD Richard Kerich said Mr Mohammed died in hospital while undergoing treatment for the multiple stab wounds on his back, stomach, chest and neck.

Mr Mohammed has since been buried but police are waiting for a post-mortem report on his death.

The woman also sustained stab wounds on her stomach, right thigh and left hand during the incident. She is handcuffed on her hospital bed and is under constant police surveillance.

The landlord, Mr Ndwiga Gatimu, said that he heard the deceased crying for help from Ngarania Court, house number 539 and went to check.

He saw Ms Wanjiru, popularly known as “Biggy” walking inside the house. She however refused to open the door prompting him to call the police.

Police visited the scene and forced the door open. They found blood stains on the sitting room, but when they checked the bedroom, they found the deceased lying in bed, with 22 stab wounds.

Police have sought the help of mobile service providers after the deceased phone was found completely smashed and no data could be retrieved from the shell.

Other exhibits collected from the scene include a laptop, the blood stained knife, blood-stained bed sheets and pillows.